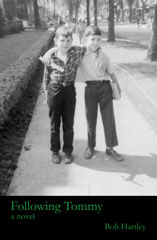 Following Tommy tells the story of bookish Jacky O’Day and his older brother Tommy in the back streets of 1960s Chicago. Hartley’s debut novel uses witty, cutting, concise language to explore American race relations, class-consciousness and the American Dream. The humour throughout the book made me laugh out loud. Here is an example:

Hippo was telling Tommy a joke about two old ladies in a movie theatre sitting next to a guy with a chicken stuffed down his pants. “So,” Hippo said, “the one old lady says to the other, ‘Mildred the man next to me is exposing himself.’ and Mildred says, ‘Ya seen one, ya seen ‘em all.’ And the old lady says, ‘Yeah but this one’s eatin’ my popcorn.’”

From an Irish American family, living in the rough part of town, the petty thieves, Jacky and Tommy sound like stereotypes in the extreme but the characterisation and empathy created with the main character makes this book and enjoyable and recommended read. When the first black family move into the neighbourhood, Tommy wants blood, an angry man with little hope for escape. Yet Jacky has other ideas, enlightened beyond his time, a reader and intelligent, the action moves rapidly. Cops and Robbers move the story along with unexpected action. Young love and lust is also explored.

Bob Hartley was raised on Chicago's West Side and his knowledge of the areas shines through in his vibrant descriptions. The brothers take a stroll down Maxwell Street trying to sell stolen drills, passing by Polish sausage stands and tacos de lengua. The book sets the scene with passersby on the way to church, and Jacky’s disdain for their hypocrisy is evident:

Every Sunday was the same for church goers. They’d walk slowly past, the men nursed hangovers, the women prodded the kids and that goddamn bell of St. Lucy’s endlessly clanged, reminding them that they were going to squeeze into those wooden pews, pulling at collars, kids squirming, peeling shorts from sweaty legs, and listening to Monsignor Cunningham’s whiny voice drone on about the Lord, and the missions, and the school, and begging for money and preaching honesty. Honesty? Where’d he think the money came from to build the sweatbox he preached in?

Torture. And for them what made it real hell was passing Doyle’s right there on the corner of Menard and Chicago Avenue and only a block from St. Lucy’s. Dolyle’s with Schlitz on tap, Cubs on the color of Zenith, quarter-a-game pool table and jars stuffed with nickel boiled eggs and beef jerky.

The books raise several questions about society that go unanswered but lead to reflecting by the readers. Who has power in our society? Who are the real criminals? What does the American dream mean today? This is an adventure in the depths of the human heart. A good read, snappy and well written with enough twists and turns for you to keep the pages turning.

Support this writer and the independent publisher and buy this book now.